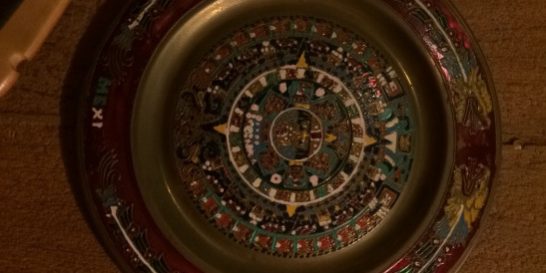 This post is the first in a 3-part series exploring diversity (or the lack thereof) in Chicago’s yoga community. The author, Karla Velasco, wrote it as part of Natalie Tomlin’s “Explore Chicago” course at DePaul University in Winter 2016. This class took students to visit several Chicago yoga studios, and asked them to write about their experience. Karla chose to frame her reflections as letters to her Abuelita, or Grandmother.

It’s really cold today, 25 degrees, and I decided to wear open shoes. I feel my socks wet and cold. Not a good way to start the day, pero bueno.

In order to arrive at our next excursion, Yoga Circle, we got on the brown line train to the Chicago stop. The train was going very slow. Not a lot of diversity in the bus. Besides the diversity of the class, there is a lot of Caucasians on the train.

There is an utter beauty and positivity with diversity in yoga studios. There seems to be less diversity in the train than in Chi-Town Shakti (a different yoga studio visited with my class). Does that really reflect the neighborhood of River North, where Yoga Circle is located? 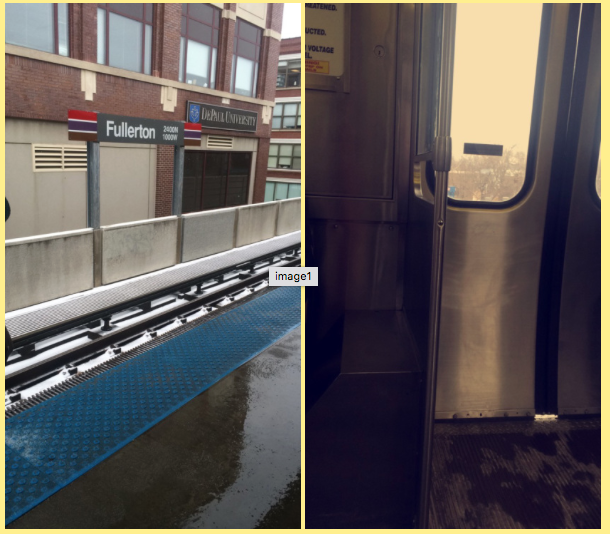 According to CityData, this is exactly right: About 75% of the people in the Yoga Circle neighborhood identify themselves as “White.” Will that pose a problem to the audience Yoga Circle attracts? How will Yoga Circle get diversity from the yoga community?

Pilsen, a predominantly Mexican-American community has yoga studios that seem to face this same problem.

One of them is called PFit Yoga, which offers residents Ashtanga, Vinyasa, and Deep Focus yoga for $10 each walk-in. The question is whether the Mexican-Americans are actually attracted to the studio and if that price is reasonable for a neighborhood that has experienced growing gentrification and soaring housing rates. Many residents of Pilsen speak Spanish as well, but this yoga studio does not take that aspect of the Mexican-American or Latino culture into consideration. Even if you wanted to try yoga, you can’t do it here abuelita.

So, how do they serve the Latino community in Pilsen, and how do they demonstrate diversity? Is diversity based on the kind of people yoga serves or is it diversity on another level? 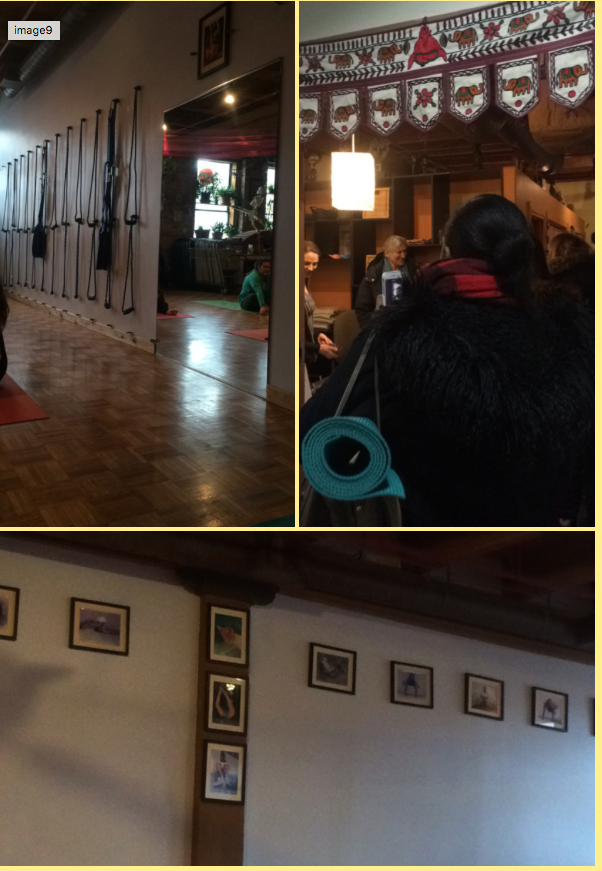 Inside Chicago’s Yoga Circle, an Iyengar Yoga studio opened in 1975

Roseanne, a blogger on activism and politics in yoga, says that members of the yoga community “need to unpack the terms “diversity” and “inclusivity”, and examine their usage”.

I didn’t really understand that there was more than one usage of the words “diversity” and “inclusivity” until I met Gabriel Halpern, the owner and teacher at Yoga Circle.

Neta abuelita. I am serious. That’s what he was wearing.

Then, he started singing.

He didn’t even have to say it. I knew he was part of the post World War II generation, the “counterculture” of the 60s.

“Our country was totally a lie. A mafia.” He said.

And how did people deal with it?

That said, the point of doing drugs was not to seem cool. But to take people to a different transcendent level where people gained consciousness. People had to go inside this state of individuality and consciousness to find out what the truth was about. The deeper you go inside, the more you realize how it is about the world, not just you.

In the words of Timothy Leary: “Turn on, tune in, and drop out.”

When Gabriel spoke, he told us that yoga was a cognitive and participatory practice as described by the people that are masters of yoga. The purpose of emphasis on proper alignment is because it is symbolic of opening up.

Gabriel said that the excursion was divided in two parts:

That’s exactly what happened. We performed a series of poses, said their names out loud, and held many of them for a minimum of 5 seconds. It was a lot like exercising. The best part of it was getting on the sling and being upside-down, my neurotransmitters moving all across my body. Once I got back on my feet, I really felt like I was in another level, another state of consciousness within myself: “Turn on, tune in, and drop out.” 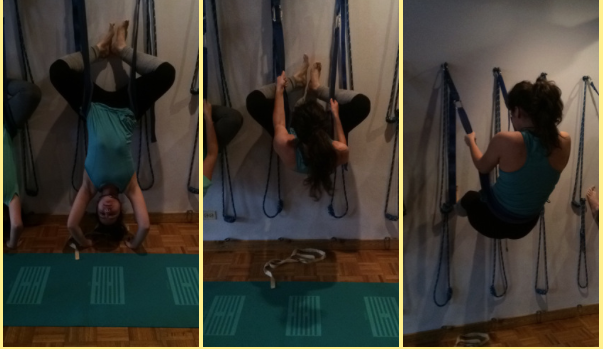 Learning to work with the wall ropes at Yoga Circle.

According to Gabriel, diversity is not about the kind of people his studio serves or about the type of people who practice yoga in Chicago and the world, but its about having a global mindset.

India, the birthplace of yoga, he said, is just one very diverse country. No matter how different you may think you are, in India, you aren’t regarded as different because of its rich cultural diversity the people, the food, the religions, the nature, animals….

But not necessarily does that mean India is the only country with immense diversity. There are many other countries that have beautiful traditions and diverse people, food, religions, nature, animals…

In order to have diversity, we need to respect other cultures. And how do we do that? How do we appreciate and honor our own culture and the culture of others?

Global mindset. Having a multicultural mindset is attaining diversity within one’s self. This is part of the gained consciousness and transcendent state that yoga is supposed to take you to. That’s the “tune in” Timothy Leary talked about. You positively use the power of yoga when you use your power on behalf of other people.

And that’s the beauty of yoga, abuelita.

It is very warm and relaxing.

Props all over the place.

There was all kinds of blocks, slings, strings, towels, chairs, beanie bags, and other stuff that students could use as props.

You can tell that here, they emphasize on the proper alignment, unlike Chi-Town Shakti which emphasizes on meditation.

In Yoga Circle, the yogis practice Iyengar, a form of Hatha Yoga that has an emphasis on detail, precision and alignment in the performance of posture (asana) and breath control (pranayama).

Does that mean that their focus is on the physical rather than the spiritual aspects of yoga? Does it make this kind of studio practice less religious?

This is where the religion issue of yoga arises: some practitioners indirectly enforce religion in their yoga classes.

In Julian Walker’s essay entitled “Enlightenment 2.0”, which appears in the book 21st Century Yoga, he writes about that many purists argue yoga is about “transcending attachments, stilling the mind”.

He says it is about “withdrawing the senses from the world around us” and “attaining a personal realization of God beyond manifest realm.”

Is yoga a religion then?

Philip, an Interfaith Minister and author of a book on the impact of yogic teachings in America, says, “It depends.”

Yoga Circle presented yoga as coming from the master, B.K.S. Iyengar. Many pictures of him were on the wall, who is credited with bringing the practice of yoga to Western culture. There might be spirituality linked to yoga, but not necessarily religion in Yoga Circle.

Do you think yoga is religious still abuelita? Because I might just be guilty of wanting to attain “a personal realization of God beyond manifest realm”, wanting to “tune in.”

But wait, it’s not over yet.

I walked to the closet to get my bag, jacket, and my shoes. As I struggled to put my white tight shoes on, I noticed something on the wall . . . 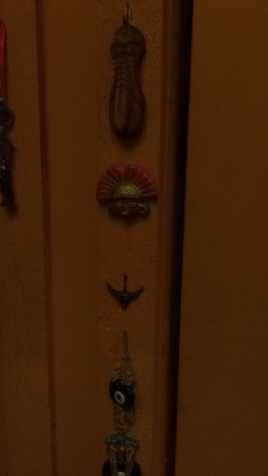 It was indigenous figures. I’m not sure from where, but I recognize indigenous representations when I see them. I have to admit, I was surprised to see such beautiful cultural forms in a Chicago yoga studio amidst a predominantly well-off Caucasian neighborhood. 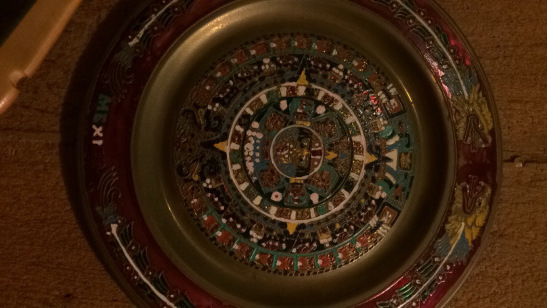 Cultura! Mexica art right here in front of my Chicana face. A beautiful colorful symbol of our Mexica and Aztec indigenous ancestors. I wish you would have seen it abuelita. It would have made you very happy.

Gabriel was right. It’s not about the people that come to your studio, or the neighborhood you’re from. It’s about that global mindset: “Turn on, tune in, and drop out”.

Karla Velasco is a Chicana student and activist born and raised in Chicago, but very in touch with her Mexican indigenous roots and Latino culture. She recently completed her Freshman year at DePaul University, where she is double-majoring in Latin American/Latino Studies and Political Science. Karla serves as a community organizer in the Pilsen neighborhood of Chicago, a culturally rich community that’s home to the largest Latino population in the city, and as Chair of the Student Leadership Youth Committee at the Pilsen Alliance. She is also a certified Domestic Violence Advocate at Mujeres Latinas en Accion. Karla loves to explore diversity, and has become increasingly interested in exploring these issues within the context of yoga.