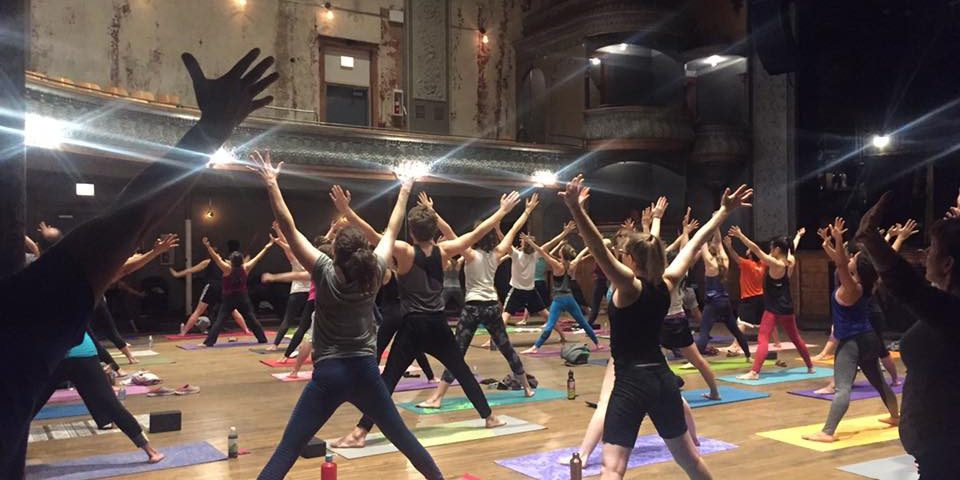 This is the final post in a 3-part series exploring diversity (or the lack thereof) in Chicago’s yoga community. The author, Karla Velasco, wrote it as part of Natalie Tomlin’s “Explore Chicago” course at DePaul University in Winter 2016. This class took students to visit several Chicago yoga studios, and asked them to write about their experience. Karla chose to frame her reflections as letters to her Abuelita, or Grandmother.

Have you ever heard of yoga socials?

La neta me neither.

Today, we have a speaker named Justin Henderson, owner of Bender. 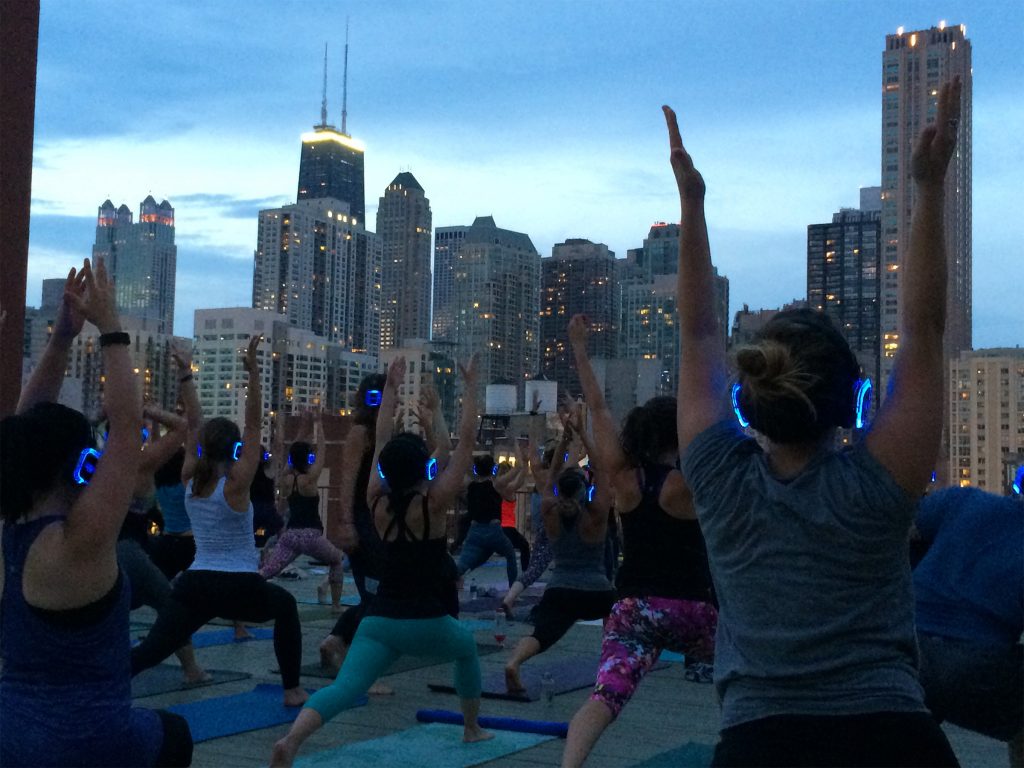 According to Bender’s Events website, Bender is “an urban playground for body and soul that blends yoga, dance, fresh music, art, and culture.” Bender was founded in Chicago, and has now expanded into LA.

I know what you are thinking about these yoga socials, abuelita.

You might be thinking it’s a whole bunch of people coming together to do yoga and then they go out to have some drinks, a coffee or go clubbing.

Justin Henderson says that yoga socials are, “An event where you go do yoga, and afterwards, it is some type of social hangout.”

So, how do yoga socials try to attract the diversity of different communities, abuelita?

Well, they use two dimensions of value:

How do yoga socials use the first dimension, variety?

Easy, they offer a lot of different social events.

No worries, you can go have a drink after yoga class instead.

No worries, you can go eat a delicious cuisine after yoga class instead.

There’s many options for many different people.

One of these unique options is the Bender L.A .preview session: “Yoga x Creative Culture.”

Mary Beth LaRue leads a “playful and energizing vinyasa yoga class” at the Bergamot Station Arts Complex. During this vinyasa yoga class, Justin Henderson serves as DJ, and also projects photos of the street art and creativity happening in LA.

This is not just any yoga class, abuelita. This is a yoga class that will help you gain an appreciation for the art in your city. People really learn to admire the street art that is around them.

There’s a lot of power in that, don’t you think, abuelita?

We’re starting to see that same power in the Latino community in Pilsen, which arose similarly as a Bender social.

An article on DNAinfo.com about Pilsen, Little Village, and the near West Side called “Free Yoga Class Sunday at Thalia Hall” talks about the Pilsen Yoga Tribe. 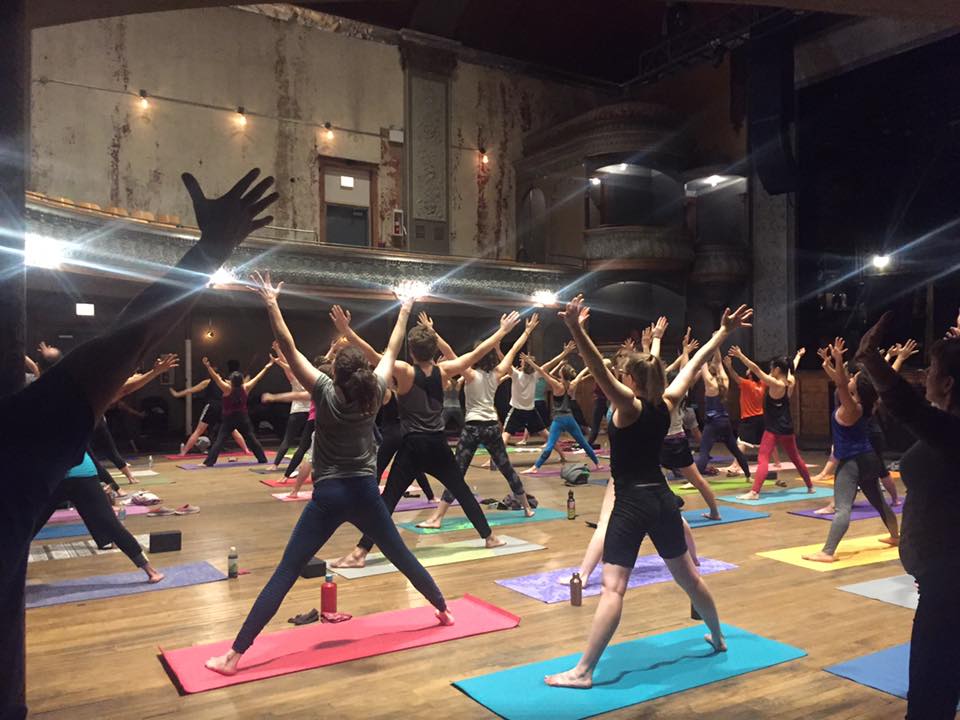 The Pilsen Yoga Tribe offers a free yoga class that practices pranayama, asana and meditation in the neighborhood Sundays at Thalia Hall. The class is open to the community.

The Pilsen Yoga Tribe  is really a tight knit community united for Pilsen.

There is a beautiful combination of accessibility and diversity in their yoga because it’s free and it serves their community.

It seems like a great option, except one thing abuelita . . .

It’s not in Spanish.

According to the Yoga Journal in the Huffpost Healthy Living, Latinos are the second largest ethnic group in the United States, making up 17.1 percent of the total population in 2013.  Now that we are in 2016, that percentage has increased.

What does that mean for the next big trend in the yoga world?

Rina Jakubowicz, who is Cuban and Argentinean, was born in Venezuela, and immigrated to Miami at age 4, teaches a Spanish-language Vive Vinyasa Yoga class at one of her three Rina Yoga studios in Miami. She says that offering classes in Spanish is the first step in attracting more Latinos to the mat.

“[Yoga] hasn’t been presented to Latinos. They might feel like it is not accessible to them — there haven’t been a lot of Spanish yoga classes,” says Jakubowicz, “If you make it available, people will start doing it.”

Most of the population in Pilsen speaks Spanish. We need to make yoga available for all of those people by offering similar Spanish yoga classes.

Lauren Imparato, a NYC-based yoga teacher, led Spain’s first-ever public outdoor yoga class (in Spanish) in Barcelona in 2012. It sold out with 2,000 participants. Since then, she has led Spanish-language yoga classes for thousands in Panama, Ibiza, Madrid, Mexico, and Colombia. “There’s no need for language to be a barrier [to yoga],” Imparato says.

There’s no need for language to be a barrier in yoga, yet so many people are not offering Spanish classes.

Yoga socials use the two dimensions of variety and accessibility to attract diversity, but yet many of them don’t offer Spanish yoga classes as an option either. 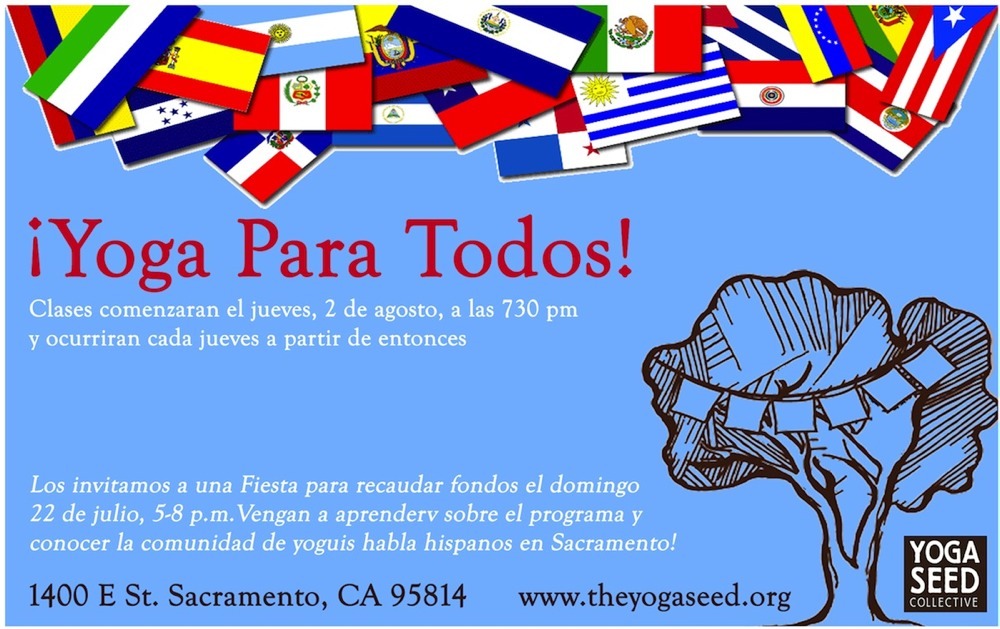 One of the bigger criticisms that yoga socials get is that they are not “real yoga.”

The traditional practice is devalued by the big yoga social events that incorporate music and fancy venues. People are frustrated about the commercialization of yoga, using it as a profit-making opportunity instead of teaching its spirit. According to the critics, yoga socials do not respect the traditional.

The problem I see with that criticism, abuelita, is that the traditional practice of yoga actually devalues and sometimes oppresses diversity. It fails to accommodate the diversity that exists in yoga.

For instance, one way we can accommodate for diversity is by making specific yoga groups.

A LGBTQ yoga group is one of them.

In the video “Yoga & Diversity: Gender & Sexual Identity” uploaded by Decolonizing Yoga, Heather Douglas, a yoga teacher in Toronto, says that overall, yoga studios are not welcoming for the LGBTQ community. People need a space where they can be themselves and do yoga, but they don’t have that.

Jacoby Ballard, a yoga teacher in Brooklyn and YSC Adviser, said he came to practice yoga like anyone else seeking healing, but yet in that same place is where he experienced the greatest harm.

In the yoga studios he used to go to, people would tell him occasionally that he’s not in the right place.

With this specificity in yoga classes, some people might think it is an exclusionary practice. In their mind, these kind of classes purposely exclude heterosexuals and non-Spanish speakers.

In an article titled, “When People of Color Say They Want Their Own Yoga, White People Should Listen,” Krista Lee Hanson, a yoga instructor in Seattle, writes about an incident where that’s exactly what happened.

A local radio personality in Seattle, Dori Monson, found out about a yoga class for People of Color and decided to attack the studio owner at Rainer Beach Yoga for exclusion of white people.

Monson said, “the fact is, this yoga class is every bit as racist as a bunch of white people who say they don’t want to be around somebody of color.”

Is Monson seriously complaining that a yoga class for people of color is racist, when the image of yoga is white people, abuelita?

White people are welcome in thousands of yoga studios nationwide.

Krista Lee Hanson even says that if you do a Google search, you’ll find that yoga images are 99% white people. 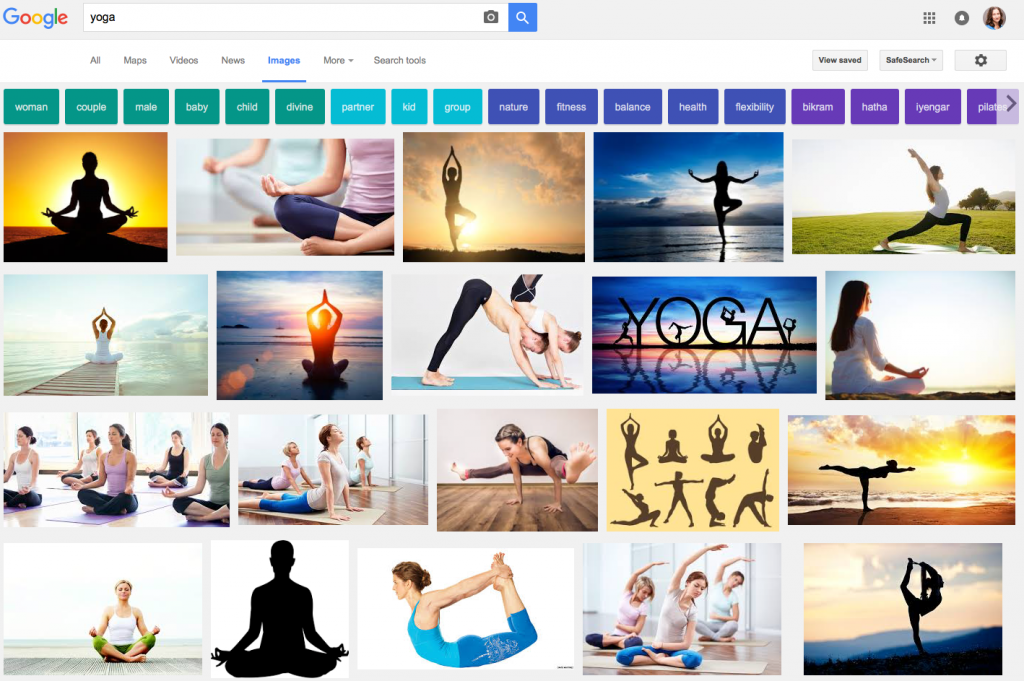 She says that, “I have often been concerned about the dominance of white people in yoga spaces, not the other way around.”

Despite this fact, a lot of people in Seattle actually supported Monson.

The owner of the yoga studio got threatening phone calls.   Anyone who voiced support for the POC yoga class online was immediately attacked. The calls and threats to the studio escalated to the point that the studio owner felt forced to temporarily close the studio and cancel the class to ensure everyone’s physical safety.

Yeah abuelita, can you imagine?

For trying to incorporate people of color from a diverse area in Seattle into yoga?

If we do that in Chicago, do you think we will get a similar response, abuelita?

Maybe we will, maybe we won’t.

But we won’t know until we try.

So, bring on the diverse specific yoga classes, Chicago.

Bring on the yoga classes for People of Color.

Bring on the diversity.

Karla Velasco is a Chicana student and activist born and raised in Chicago, but very in touch with her Mexican indigenous roots and Latino culture. She recently completed her Freshman year at DePaul University, where she is double-majoring in Latin American/Latino Studies and Political Science. Karla serves as a community organizer in the Pilsen neighborhood of Chicago, a culturally rich community that’s home to the largest Latino population in the city, and as Chair of the Student Leadership Youth Committee at Pilsen Alliance. She is also a certified Domestic Violence Advocate at Mujeres Latinas en Accion. Karla loves to explore diversity, and has become increasingly interested in exploring these issues within the context of yoga.