My New Career as a Yoga Model: Why I’m Done Hating Pictures of Myself by Rose Bak 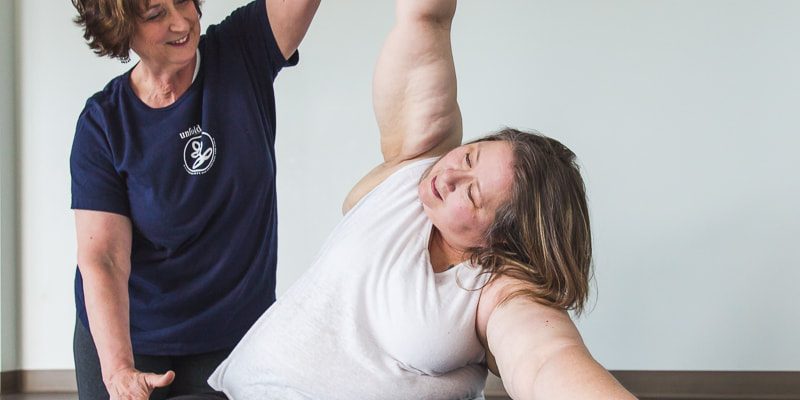 When I am in a picture, my lifelong pattern has been to critique myself. First of all, like the titular character in My Name is Earl, my eyes are always shut, unless I do a wide eye crazy face but even then, somehow the photographer usually catches me in a blink.

Secondly, I am then compelled to ruthlessly judge my looks in the picture. And I mean compelled. I catalog everything I hate: how large I look, how flat my hair is, how my clothes hang on me, how large I look in comparison to others, how much more attractive the others are, why I’m not smiling, if I am smiling how I hate the way my teeth look, why my eyes are closed, how old I’m looking….it goes on and on. Seriously, sometimes it’s exhausting to be in my head.

But I had a little epiphany a few weeks ago as part of my “I’m 50 Now Self-Realization Tour”. I was doing some cleaning and decluttering and found my old high school and college year books. I haven’t seen them in probably 20 years, so I eagerly looked through them to see memories of my long-ago youth. And I looked. And I looked.

I discovered that there are very few pictures of me in my yearbooks. I guess I wasn’t surprised but I was disappointed. Some years I apparently skipped class pictures so there’s no little headshots of me with my classmates. And even though I was involved in so many activities in both high school and college — honor society, newspaper editor, yearbook staff, Latin club, French club, multiple clubs — I’m mostly absent from the pictures. There was very little “me” in my history. I wound up recycling those yearbooks.

The sad thing is I know I’d look back at Young Rose and think she was a cutie, but there’s very little evidence to support this. Even though the advent of Facebook and Instagram has meant that I’m now capturing photographic evidence of my life, I realized I was still caught in the avoiding/criticizing picture loop.

I was so appalled I decided then and there I was going to stop being so freaked out about pictures, stop cataloging my faults, and start embracing my photos. If people don’t like the way I look in a tank top, they don’t have to look. If my eyes are closed, so what, I thought. I’m resolved to be brave and look for things I like in my photos, the way I would if I were looking at a photo of a loved one or a friend.

Wondering if I was all talk? Yeah, well, within days of my epiphany, an opportunity came along to test my resolve. My yoga studio was looking for students to pose for new photos they could use for social media and other purposes. They were specifically looking for a variety of ages, sizes, races, and disabilities. I thought, I love yoga. I don’t look like a “typical” yoga person. And I fully credit yoga for keeping me from being fully handicapped (I have bars immobilizing about half my spine, leading to lots of pain and lack of movement). Without giving it too much thought, I immediately e-mailed the studio owner and said that I was interested.

I then proceeded to dither about it for a few weeks until the photo shoot. Would I have the guts to go through with it? I actively tried to counter every fear with a “so what?” What if I look too fat in these pictures? So what, fat people can do yoga. What if I look too old? So what, yoga is great for reversing the effects of aging. What if there are unflattering shots of cellulite or fat rolls? So what, most people have them, and if people don’t like it, they don’t have to look.

Photo shoot day came. We were supposed to wear a plain white shirt, so I purposely went with a tank top to challenge myself and my self-judgement of my arms. I fixed up my hair carefully, spending more than my customary five minutes in order to get it looking great. My friend did my make-up, something I rarely wear. And before the shoot I did a little self-love kindness meditation in the car to get myself in the right frame of mind and calm my nerves.

And you know what? It was fun. I didn’t feel too awkward, especially after we got going. I often feel awkward in new situations, so that was good. I tried to relax and not think about what I looked like or where things were sagging or rolling. I tried to just be. Be present. Be me.

A few weeks went by and I’d almost forgotten about the photo session. Then I went to sign up for class yesterday and I saw it: they had updated the website and there was a picture of me. I did a double take, the way you do when you see something you’re not expecting. And then I thought, wow, what a great picture! I look cute! I look strong! I look flexible! That was seriously my first reaction. As I studied it, instead of categorizing what looked “bad” about me in the picture, I consciously itemized all the cute factors: my smile, my little pink feet, the great form of my pose, my flexibility, the shiny fullness of my hair.

I look great. I actually like a picture of me. It’s empowering. It’s revolutionary. And I totally want to be a yoga model now.

Healing ourselves, Healing our communities
April 4, 2018